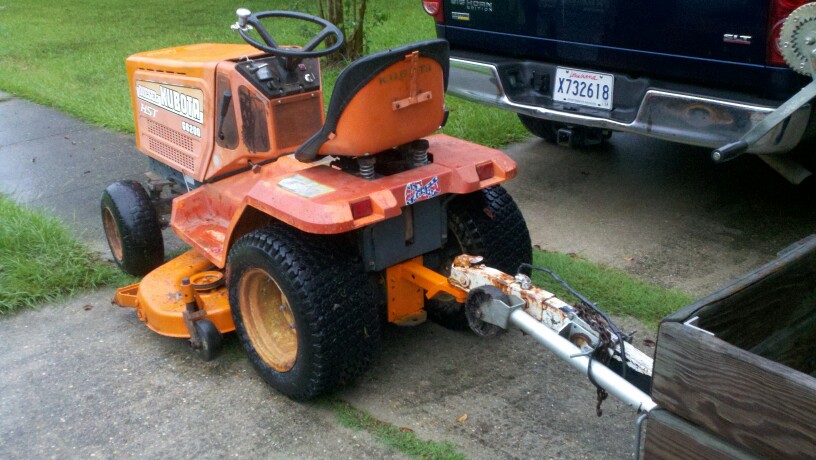 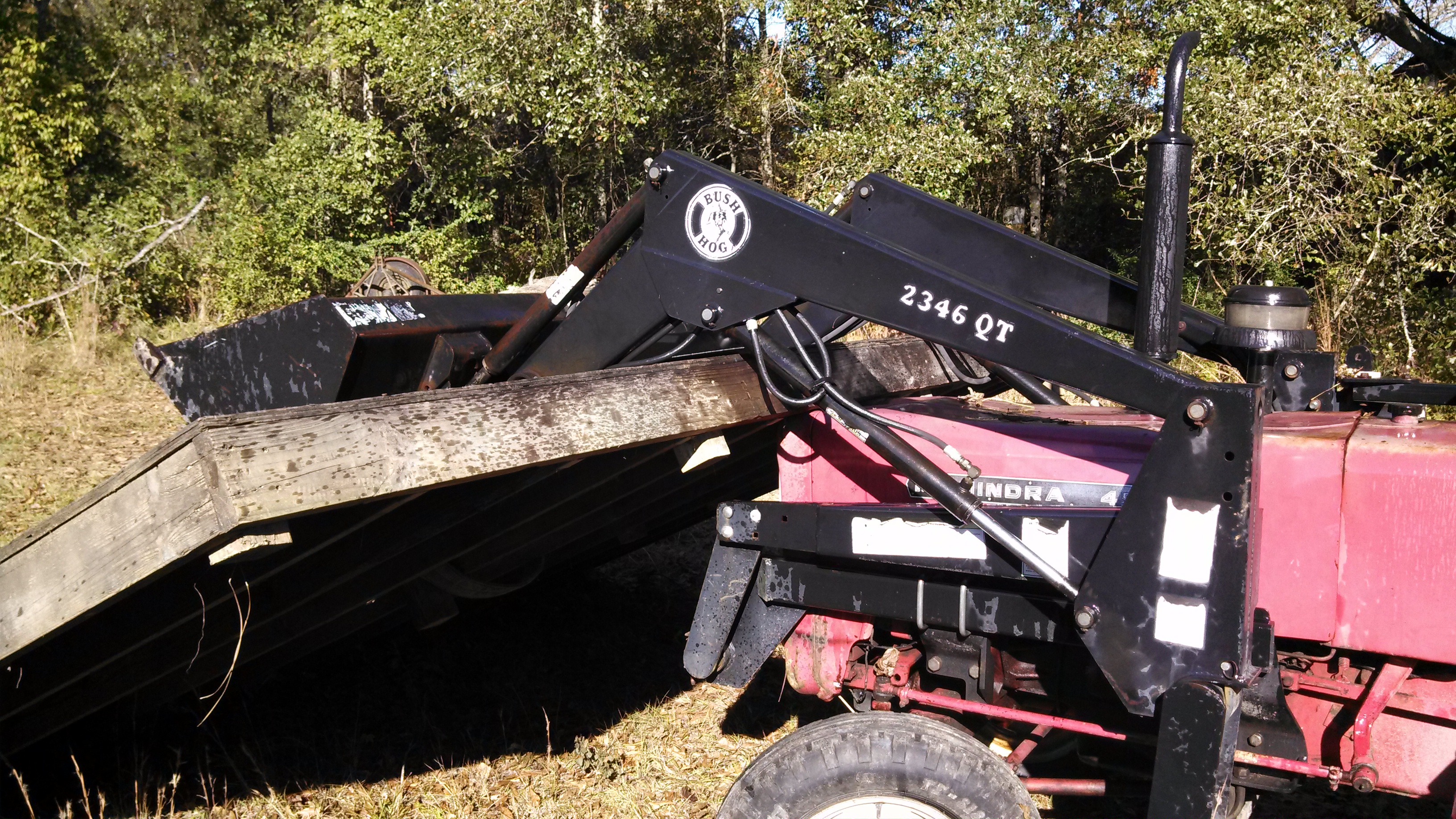 I was trying to move the deck for the shed from the back of the property to the front. Everything was good until I decided to raise it up just a little bit more. The Deck swung up and clipped the hydraulic hose fitting and broke it off. The front end loader came flying down with the load landing on top of the hood. There was hydraulic fluid everywhere. Luckily I was able to find the fitting at NAPA Auto Parts and was back in business. Needless to say we did not accomplish half of what we set out to do today. 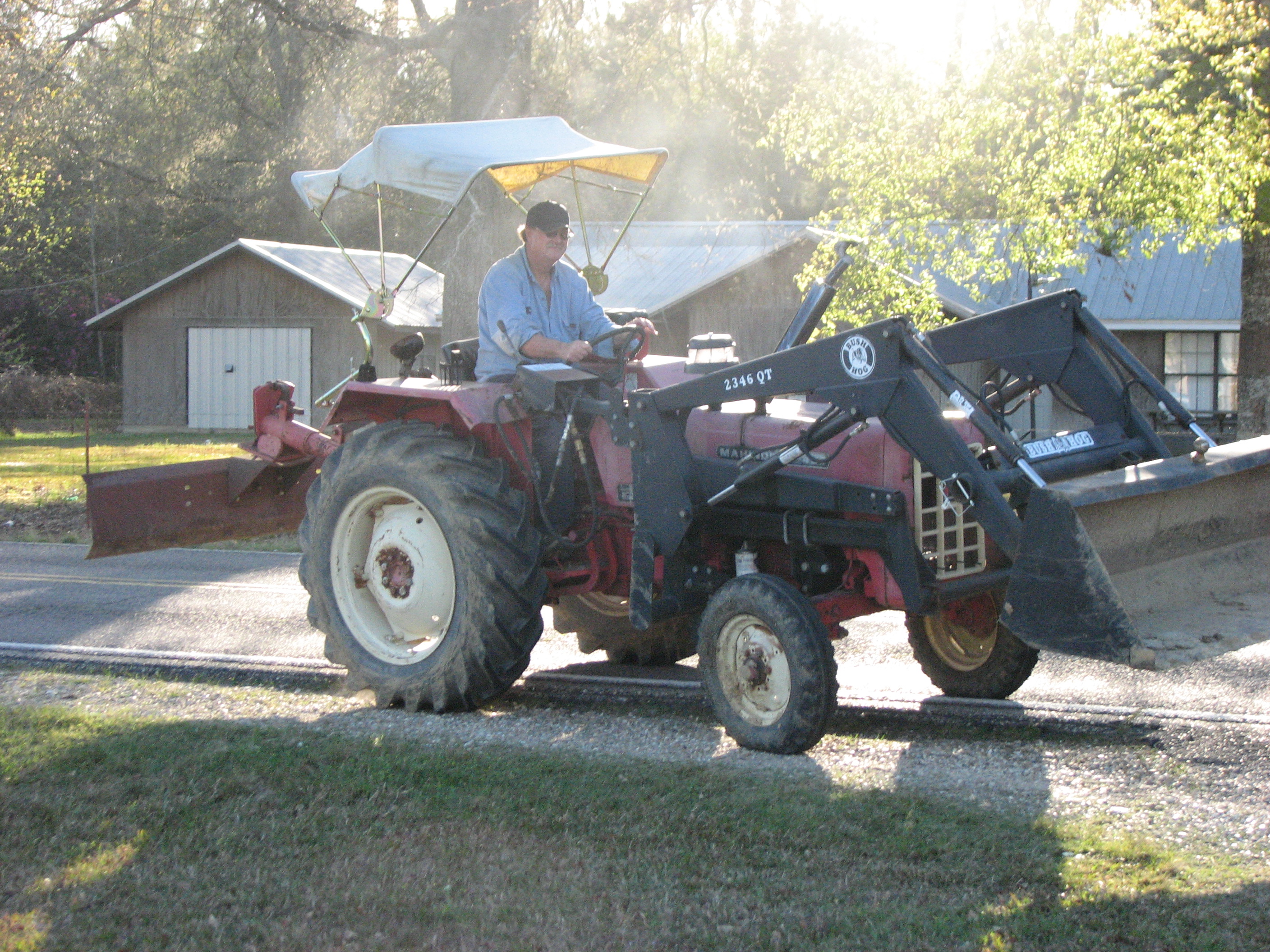 It is not me driving but it is my tractor that I lent to a friend to do some land leveling. 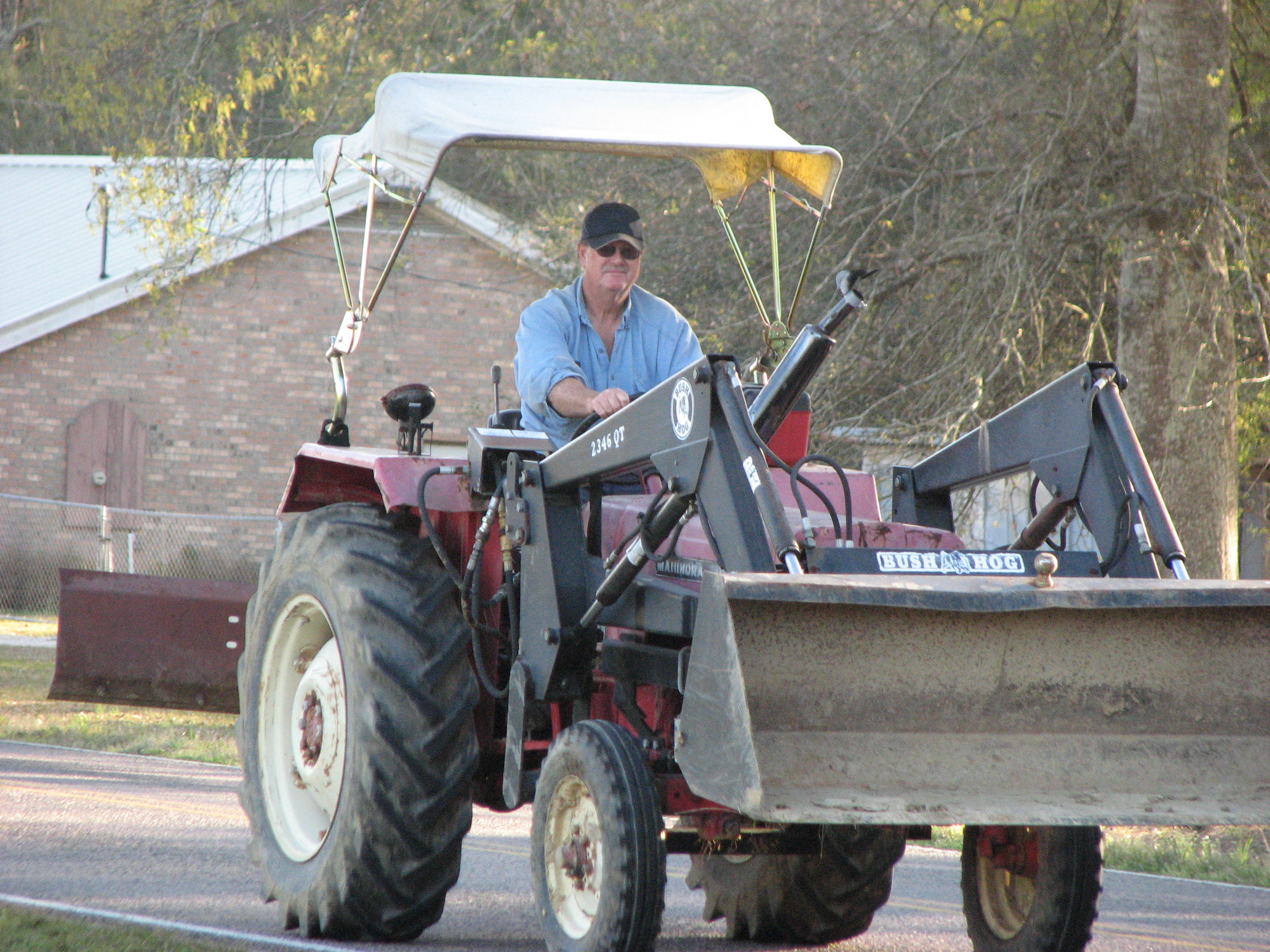 We have been cutting 2 or so acres of grass with a Snapper 28" riding mower. Not exactly the most efficient mower for the job. The man who I purchased the Mahindra from, also had two Kubota Diesel Lawn Tractors for sale.

One is a working G6200H which is a 16 HP three cylinder and the other is a parts machine G4200H with a two-cylinder, 12 HP motor. Both are the exact same tractor except for the motor size. Both have hydro-static transmissions which, to put it basically, they have automatic transmissions. Except the shift is a foot pedal.

The deck on the 6200 had a bad spindle so I rebuilt all three of the spindles. The other deck is pretty much scrap due to extensive rust. I also had to replace the fan belt and the two PTO belts.

I am in the process of painting the 6200 but I will not finish it until later in the year, after the grass cutting chore is complete for the year.

I will probably sell the motor from the 4200 since I can't see me ever needing it. I will probably be able to sell it for the amount that I paid for both tractors.

It doesn't look like much now but hopefully it will when I get it painted. It runs great and that is what matters.

Below are a few pictures of it pulling my little trailer. The only problem is that it is a bit too heavy for the trailer. This baby weighs in at over 738 lbs. Update: I converted my boat trailer to a flat-bed trailer and it is perfect for hauling the G6200 around.

It sure makes cutting the grass a lot faster.

I'll post some other pictures of the process in a gallery.

I finally got to install the gift that I received on Father's Day. The sunshade went on without a problem but the seat was not so easy. The seat that was purchased (which was the exact same one I was going to buy) if installed, is only about an inch away from the steering wheel. I had to resort to a flat seat to give me the clearance that I needed. I happened to have a seat from a garden tractor that I had purchased in the back of the truck. I tried it and it fit perfectly.  It is not new but is in real good condition.

I will return the new seat and purchase a much needed overrun clutch for the PTO. Pressing in the clutch and going and additional 20 to 30 feet before stopping, even with the clutch and brakes pressed is not fun. It could lead to taking out a tree, fence or worst, which would not be good.

Update: I did finally go and get the correct new seat and installed it. It is much more comfortable than the garden tractor seat.

Father’s Day 2012 will go down in the books as the best Father’s Day ever. I had the family over and got loaded down with presents. I got a new seat for the tractor, a new sun shade for the tractor and a deep-sea fishing trip in Destin, Florida with  my son. I was totally blown away by all of this. I had no idea that they even knew I needed the seat and as for the sunshade, I didn’t even think of needing it until Saturday when I bush-hogged 4 acres in the sun.

Thanks to my kids and my beautiful wife for everything.

I went straight to the land from work and on the way, there were a few rain drops but not bad. I got to the land and it was not raining. I got on the tractor and proceeded to do the three things I wanted to do before removing the backhoe from the tractor. I yanked a grounding rod out of the ground that was a trip / lawnmower snag hazard in the front yard. The FEL (front end loader for you city slickers) made small work of that job. Then i proceeded to try to find (in the un-mowed tall grass) a marker that I had planted that had something that needed to be dug out. I do not even remember what it was that needs to be dug out. I never located that so I went on to job number three. Locating a 10 or so foot long electrical pole that was lying in the tall grass. I originally found it by accident when I rolled over it while bush hogging with the Kubota tractor. I wrapped the chain around the pole and lifted it with the FEL and drove off to the trash pile. Well that was fine until I tried to cross a flooded spot in the field and the backhoe stabilizers got stuck in the mud and stopped the tractor. I tried to use the differential lock to no avail to go forward and backwards. I tried to use the backhoe to pull myself out but the backhoe is made for digging, not for lifting a tractor that just the tires weigh about 800 pounds. I finally called in experience backup, an Operating Engineer named Ray. Not only is he an equipment operator but he also has a tractor so he has lots of experience in this sort of thing. Ray used the backhoe stabilizers to raise the wheels above the ground and we laid several layers of 2×6’s under the tires and set it back down on top of them. Between Ray’s truck and the differential lock, it rolled right out of the hole. At least I now have an idea of what to do next time. And believe you me, there will most definitely be a next time! Pictures to come later.

The tractor was delivered to the land last Monday. All week I was looking forward to getting on it and digging some holes, etc. Well the weather had other plans. On Friday I left work in New Orleans with a clear sunny sky. When I got to the middle of the Lake Pontchartrain Causeway that all changed. It rained the entire rest of the way to the land. But it was probably karma that caused it. You see, I had to be a SA and call my co-worker and tease her that I was off and she was still working (only to be informed that she was knocked off also). There I was in the pouring down rain with a vinyl sign over my head attempting to stay dry and checking out the tractor. I may have mentioned that it needs a new seat or should I say it needs a seat. All that is there is the old plastic subframe that is in a honeycomb pattern. This happens to hold water. So as you can imagine I got a wet ass. Not a comfortable feeling when wearing jeans. I played with the front end loader a little but I was too uncomfortable to have a good time. I put on my pouting lip and drove home in the rain. As Saturday and Sunday’s forecast was 50-70% rain, I did not even attempt to go back to the property over the weekend. It was a good call after looking at the rainfall totals.

There is always next weekend. I hope it turns out better.

I went ahead and bought the Mahindra tractor. I think I got a good deal on it. It is a little faded it runs great. And I can really use the backhoe and front end loader on the land.

I have an opportunity to purchase a 45hp tractor at a very reasonable price. The tractor itself is not necessarily the bargain, the implements actually are.

It comes with the following implements:

* Both the battery and the alternator have been checked out and are working. The problem seems to be the cables.
We are taking a road trip to Elizabeth, LA on Saturday to check it out.

It is owned currently by a co-worker of Cheryl’s.

I was not looking to get a new tractor right now but I can sure use that front end loader and backhoe on the land.